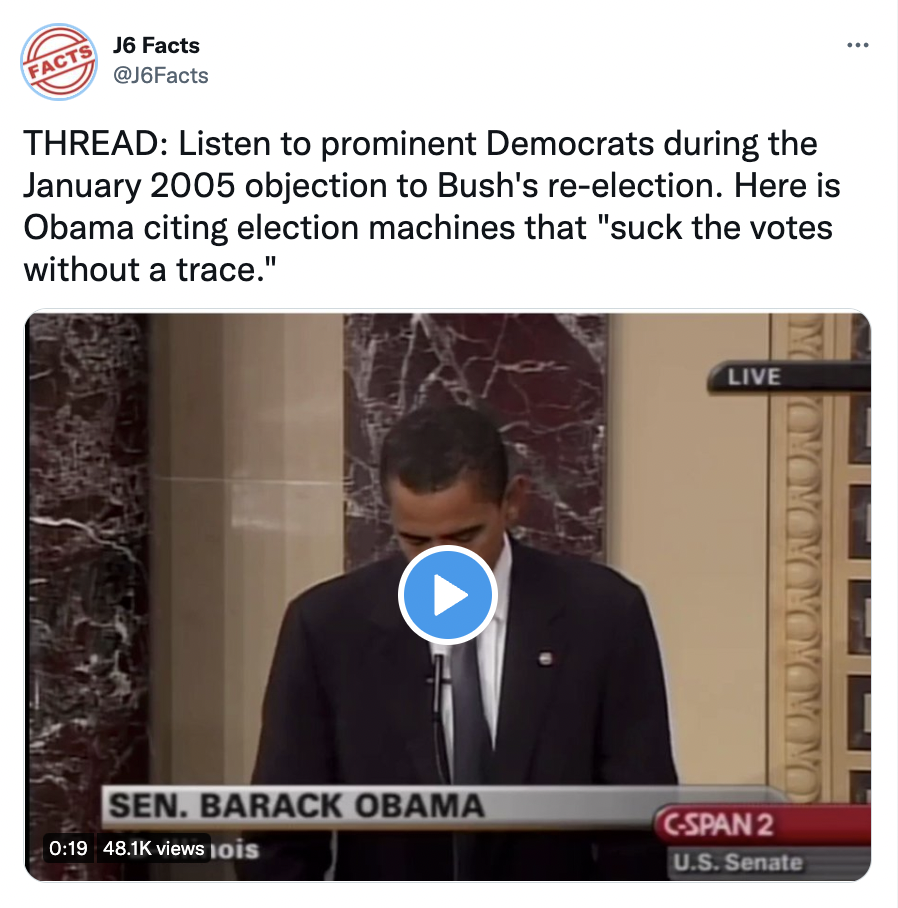 Conflict of Interest?: Two DHS Senior Attorneys Are Working as ‘Detailees’ For the January 6 Select Committee

For the past ten months, two current Department of Homeland Security senior attorneys have been helping the partisan January 6 Select Committee investigate the riot at the United States Capitol, raising questions about conflicts of interest, and potential violations of the separation of powers and the Hatch Act.

Rep. Zoe Lofgren (D-CA) — who took a leading role in the January 6 Select Committee’s second hearing on Monday focusing on former President Donald Trump’s claims of voter fraud in the 2020 election — once questioned the integrity of voting machines in the 2004 presidential election.

Reaction in The Washington Times:

“This is more evidence of the double standard imposed by socialist Democrats,” Matt Schlapp, the chairman of the Conservative Political Action Conference and the American Conservative Union said in a statement. “The same people that questioned election results will call you treasonous for doing just that.”

In the case of ABC, World News Tonight attracted 70 percent more viewers on any given night last week than the Thursday night hearings did. On NBC, audiences were 80 percent larger for Nightly News than they were for the hearings, while for CBS Evening News the advantage was a more modest 32 percent.

“When you think about what this committee has done, never in the history of this country, in the history of the House of Representatives, has a minority leader not been able to put on a select committee that individuals he or she has selected,” said [Rep. Jim Jordan], adding that Rep. Rodney Davis (R-Ill.) has also sent a preservation letter to the committee requesting that all information be kept for review.

“We also know that this committee has altered evidence and lied to the American people about it, so much so that they had to issue a statement which says, we regret the error, which is government-speak for, we got caught lying,” also said Jordan, who has not complied with the committee’s subpoena to testify.

A well-oiled fog machine operated by the Department of Justice, congressional Democrats, NeverTrumpers, and the national news media is once again pumping lie after lie into the body politic in a last-gasp attempt to destroy Trump and the powerful political movement he created.

Now the Jan. 6 panel — led in part by the Russian collusion advocate Rep. Adam Schiff, D-Calif. — has been called on the carpet for falsely suggesting a GOP lawmaker ran a reconnaissance mission inside the Capitol for Jan. 6 protesters the day before the riot.

President Biden said he didn’t watch the first Jan. 6 hearing Thursday night, but stressed that the select House committee’s work is key to secure the future of America’s democracy.

“The insurrection of Jan. 6 is one of the darkest periods of our nation’s history,” Biden said during an event here at Port of Los Angeles. “The same forces that allowed Jan. 6 remain today.”

Matt Schlapp on Tucker Carlson: The Democrats want a two-tier system of justice

Once Democrats got complete control, they began trampling Americans’ constitutional rights. They trashed their due process protections, subpoenaed over a dozen Americans for the sole crime of planning First Amendment protected, legal and permitted political rallies, lied to witnesses, doctored text messages and made false accusations. The committee ignored House transparency rules and even the rules Democrats wrote to govern its conduct.

All these abuses were meant to punish Democrats’ political opponents, which is the committee’s overarching goal.

That’s how much taxpayer money the Democrats have spent on the January 6th Committee.

The January 6th Committee is nothing more than a fictional television drama set to debut on Thursday night. Contact the members of this illegitimate circus and tell them to focus on the economy, inflation, supply chain shortages, and other issues impacting Americans every day.

About the First Amendment Fund

The FIRST AMENDMENT FUND was established as part of our mission on Criminal Justice Reform to advance Constitutional and civil rights through litigation and legal representation.

Receive updates on breaking news regarding the Democrats’ sham hearings.